“From the journals of Ekafti Acomar, 19 B.B.Y. (before the Battle of Yavin):” Strange times make for strange allies. On Bakura, we had rescued the leader of the Brotherhood, a mercenary organization composed of clone troopers of the old Republic and Mandalorians. Newcomer Tharg Thargsson had defeated Bela-Trepada, a “sister” clone of me turned to the Dark Side of the Force by the Galactic Empire.

We had no time to celebrate our victory, however, because Bal Grainer sent us a ransom demand for dancer Tootu Anga, the mother of mechanic Oong Bak. Grainer, the Rodian fixer associate of Garolos Banku Nuruolos, wanted 300,000 credits delivered to Nar Shaddaa, the Hutt homeworld’s largest moon.

Kass Tani, Tootu Anga’s betrothed, arrived from Duros via the fast ship “B6Z1.” Most blue-gray Durosians don’t name their vessels as other species do. I remembered Tani from our diplomatic service before Palpatine’s new order, and he was surprised to see me alive after Order 66, which had outlawed the Jedi.

Tani, who had invoked Biz Taar, brought a container of ancient soil from Duros. Oong prepared the oils and tubes for the Daar-Daar ritual, which needed to take place even in the absence of Tootu Anga. Oong also presented Tani with one of his tools as a token of welcoming him into his family.

The ritual took almost as long as Kass Tani’s trip to the Bakura system. Tani later told us that Bal Grainer had an estate in the Durosian sector on Nar Shaddaa and that, not surprisingly, he had a weakness for exotic women.

While our pilot Tark Agros was reluctant to leave the Lucky Strike, he was confident that he could pilot the swift B6Z1 through any threat posed by the Black Sun criminal syndicate.

Shortly thereafter, we arrived at Nar Shaddaa, the so-called Smuggler’s Moon. We went to the “Somewhere, Not Here” spacers’ bar. Tharg talked with two fellow Gamorreans, Baku and Shlarg, and learned about Soona the Hutt, a rival to Bal Grainer. 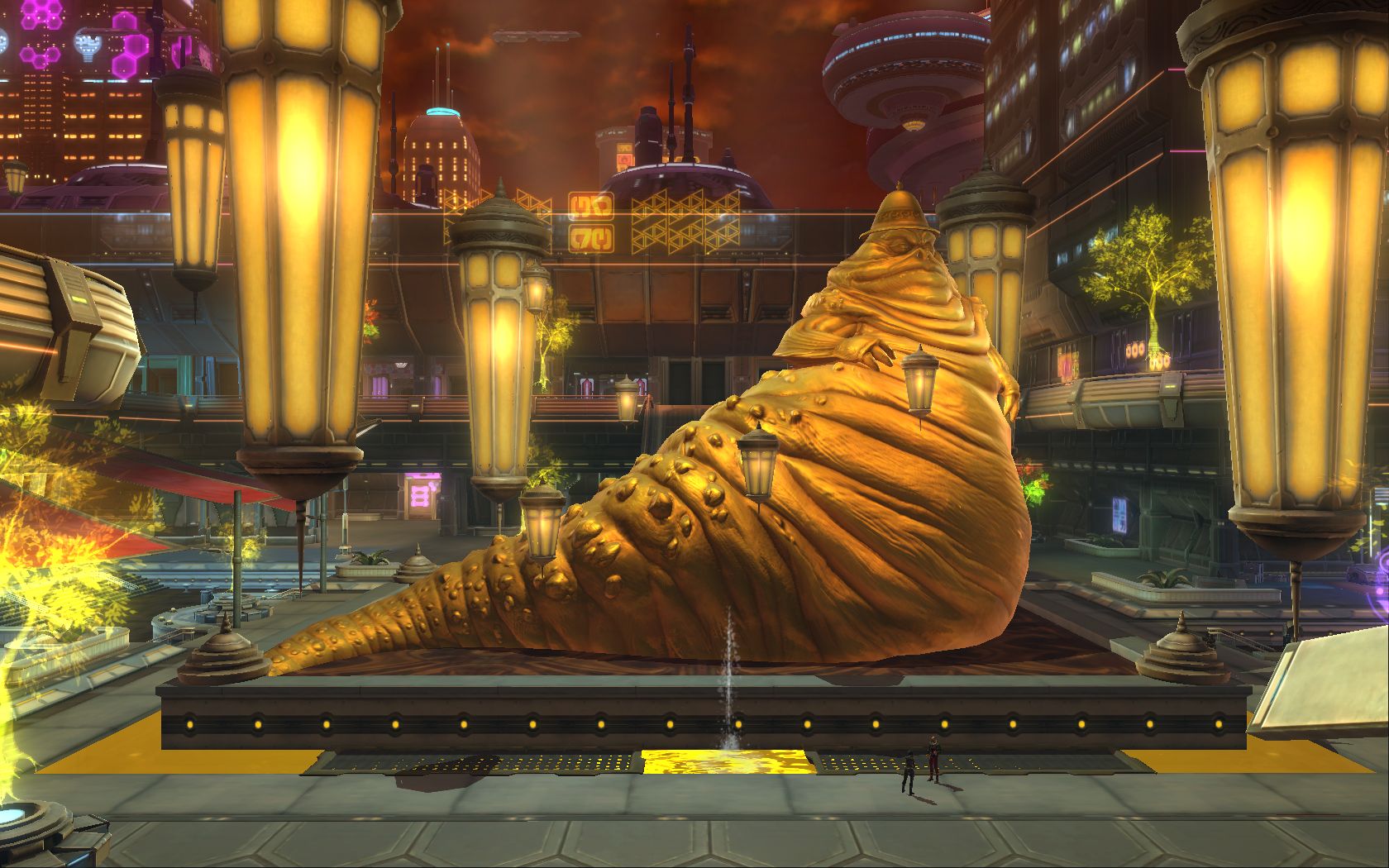 Ostensibly looking for a paying gig, Oong chatted with other Durosians to get his bearings and learn if anyone had seen his mother. We learned that Nar Shaddaa was unscathed by the virus that had affected the rest of the galaxy’s computer networks, no doubt because it was the source. Scout Ari Sundar and Jedi Thayne Highlander posed as our guards.

Tark talked with two other human pilots, a Falleen and Cutter Torsin. He had met the latter previously at the Grand Pelgar hotel. Torsin said he was working for insectoid Verpines, protecting a shipment of droid parts from G’hro to Chandrila.

A friendly brawl broke out among Tharg, Baku, and Shlarg. Garos placed bets while the rest of us left. Thayne, Tark, and Garos later went to the “Banshee Weirdness,” a private club and neutral ground for various Hutt factions. They found out that the membership fee was many thousands of credits.

After talking with hit woman Shamarra Zanab, we pursued two leads to obtain an audience with Soona the Hutt. Tharg offered his services as a disgruntled Gamorrean guard, while Garos and I pointed out that Bal Grainer’s need for money could be exploited as a weakness.

Soona had other ideas. She revealed that she had captured the “Seven Deadly Shadows,” assassins working for Grainer. If we posed as them and killed the Rodian gangster, we would get the resources we needed. While I had no intention of committing murder for hire, we agreed to Soona’s proposition since it would get us closer to rescuing Tootu Anga.

That night, Thayne had another vision. Endolana, the daughter of Jedi Master Ataru 25,000 years ago, was sick. I knew from the holocron that each of the Jedi masters whose daughters had disappeared resigned, leading to our order’s vow of celibacy.

According to Marala, daughter of Acomar and likely origin of myself and several clones, some of the girl’s essence was affected when the light saber of Shin-Wu Sorotai (Thayne’s late master) was examined.

I still hoped to find Ramoca, a lost clone, who was allegedly being held by the “Prophet of the Living Force.” Unfortunately, we’ve had to deal with Bakuran conspiracies and Bal Grainer’s ransom demands first.

We went to the Durosian quarter on Nar Shaddaa with Soona’s feathered headdress as supposed proof that we had assassinated her on Grainer’s behalf. IG-86 sentinel droids stood guard, and Grainer was surprised to find that we were the “Seven Deadly Shadows.”

In return for Soona’s headdress, we demanded Tootu Anga. The exchange went as planned, but impatient Tharg charged at the Rodian. Alas, his axe passed through Grainer’s hologram, but the droids were all too real….